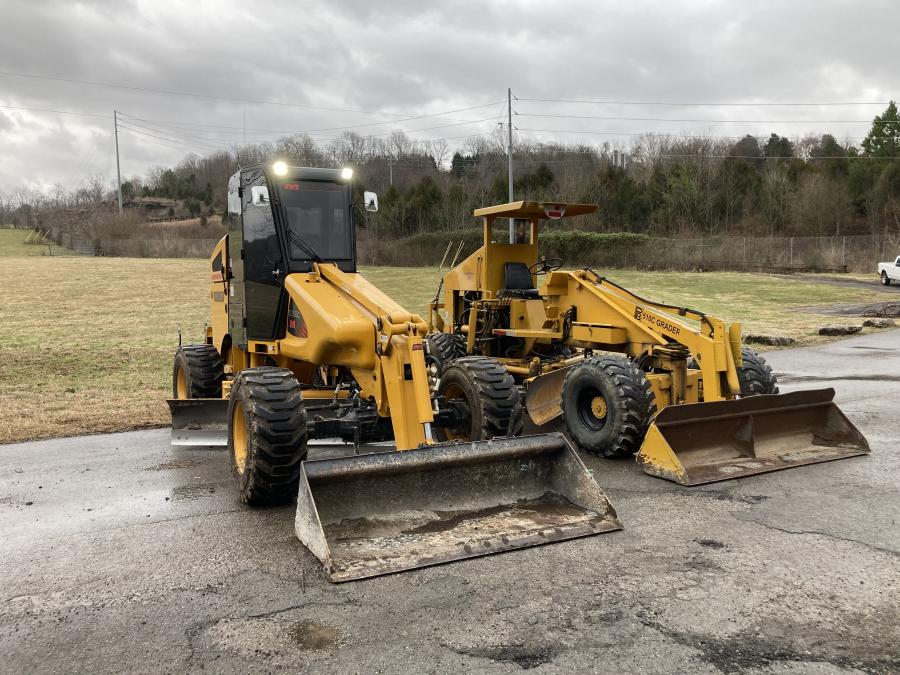 The key piece of paving equipment that Southern Sun Paving added recently came in the form of a new Mauldin M415XT maintainer, a small and maneuverable grader. It is working alongside the asphalt paving company’s Puckett Brothers 510 graders.

Often, today’s business news is all about mergers and acquisitions, or billion-dollar corporations, but it is also newsworthy when small, decades-old family companies have proven that they can establish a successful place for themselves in the highly competitive marketplace.

Proudly counting itself among the latter is Southern Sun Paving Inc. in Thompson’s Station, Tenn., approximately 25 mi. southwest of Nashville. It is a prime example of a small company that has carefully studied the business landscape and identified what it needed to do to not only stay competitive, but to thrive.

Southern Sun Paving also has benefited from being in Middle Tennessee, one of the country’s hottest building markets of recent years. The result is the asphalt paving and sealcoating business is constantly busy, doing up to 125 jobs a year, said Landon Morel, operations manager and son of the owner and estimator, McNairy (Mac) Morel.

“We can do up to 10 to 12 jobs a week if we have them all set up to go, and then some weeks we may just be working on one big project,” added the younger Morel.

Amazingly, the family is doing that much work with a total of only about 10 people making up their crew at peak production.

Family Business Does Not Stray From Its Path

While the company could invest in more people and equipment to expand Southern Sun Paving and take on a stream of large projects, it has instead decided that sticking with residential and small commercial jobs — as the Morels have done throughout the company’s 30 years — is the correct path for them.

“About once a year, Dad and I talk this over, but each time we realize that we have a good reputation and have carved out an excellent niche in the market,” Landon Morel said. “Our margins are very good, whereas if we went onto the large commercial side, we would be entering a much more competitive market. Plus, we have a lot of flexibility with what we do. If one of us needs to take off a certain day, others in the company can pick up the slack.”

With Middle Tennessee being such a construction hot spot, Southern Sun Paving does not have to stretch its resources too far from its base of operations, Morel said, adding that the company rarely works beyond 40 to 45 minutes from its shop, near Franklin, Tenn.

“We tend to work in this area and points north,” he said. “In the past, north of here toward Nashville was the area where people could afford paved driveways, while south of Franklin that was generally not the case.

“But, that urban growth from Nashville is beginning to expand quite a bit south and because of that, we stay booked out for work six months ahead of time. We are very blessed to have that kind of workload and have clients who are willing to wait for us.”

In the early days of Southern Sun Paving, Morel noted, driveway sizes were much smaller, so his dad’s crews were paving entrances costing a minimum of $1,500, with the average driveway being a $2,000 job. Today, though, the operation does projects that cost $15,000 to $20,000.

Morel said that Southern Sun Paving rarely takes longer than a week to complete a job, and if one stretches out to 10 days, it would be considered a large project.

Among the more interesting residential paving jobs Morel said his company has taken on occurred in 2020 when crews installed a driveway at the home of music superstar Carrie Underwood and her husband, former hockey star Mike Fisher. The project was completed in two phases and was over a mile long.

“We also worked for [singers] Luke Bryan and Eric Church on different jobs, and a lot of that work goes back to maintaining good reputations with area contractors, who will often call us first when they need our services,” he said.

The largest commercial project that Morel ever recalls Southern Sun Paving working on was in 2019, when the company took on the job of running up to 1,200 tons of mix per day to help pave a massive parking lot for At Home, the large chain of home décor stores.

“There was another local paving contractor working for At Home, but he was having a hard time staying on schedule in paving the new store’s parking area,” he said. “At Home had over $10 million worth of inventory sitting in the unopened store, and because they were three months behind in having their grand opening, they needed this paving project finished.

“We came in as subcontractors for the original paving contractor, along with a third contractor, ADC Paving, from Louisville, Ky.,” he added. “By working together on the job, with us running two pavers and ADC operating another, we were able to get that lot completed in a week.”

The origins of Southern Sun Paving began in 1989 when Robert Lee, a general contractor from Pennsylvania, moved to Middle Tennessee to build homes and neighborhoods, Morel said.

Around that time, Mac Morel had just finished college and started work for Landon’s grandfather on a dairy farm making $100 a week. He soon realized, though, that he needed the kind of job that would provide more for his growing family.

“Dad ended up finding Robert Lee and began working for him as a laborer for $8 an hour,” Landon said. “They partnered up and continued building houses and paving the roads in their subdivisions. Around 2000, they quit building homes entirely and focused squarely on asphalt paving and sealcoating.”

Later, Mac Morel bought out Lee’s stake in Southern Sun Paving, just before Landon’s graduation from the University of Tennessee at Martin.

“Dad was doing everything here as far as leading the jobs, running the equipment, estimating and billing,” he said. “I don’t know how he managed but my being able to support him and learn from him has been great.”

In addition to Landon, other family members working at Southern Sun Paving include his uncle, Brendan Reynolds, who oversees sealcoating. Another of Mac’s sons, Luke, is still in college and may join the business after graduation. Mac’s daughter, Lynde, handles the company’s bookkeeping part time.

“I started working here when I was five years old in the summertime when I would come in with my dad,” Landon said, noting that he continued helping every summer until his college graduation.

“It has been a transition from being an employee to an employer, just making that jump,” he said. “I have liked getting more into the business side of things and trying to focus on the people side of the company, too. We have been able to update a lot of equipment, but to be successful, we must also bring on the right people.”

Morel said he realized that fact last year due to a relatively high personnel turnover and has since worked to bring in and keep good folks to match Southern Sun Paving’s core group of four people that have been with the company a long time.

The key piece of paving equipment that Southern Sun Paving added recently came in the form of a new Mauldin M415XT maintainer, a small and maneuverable grader.

It is working alongside the asphalt paving company’s Puckett Brothers 510 graders, made in the 1980s, which Morel describes as simple and rugged machines that get the job done. 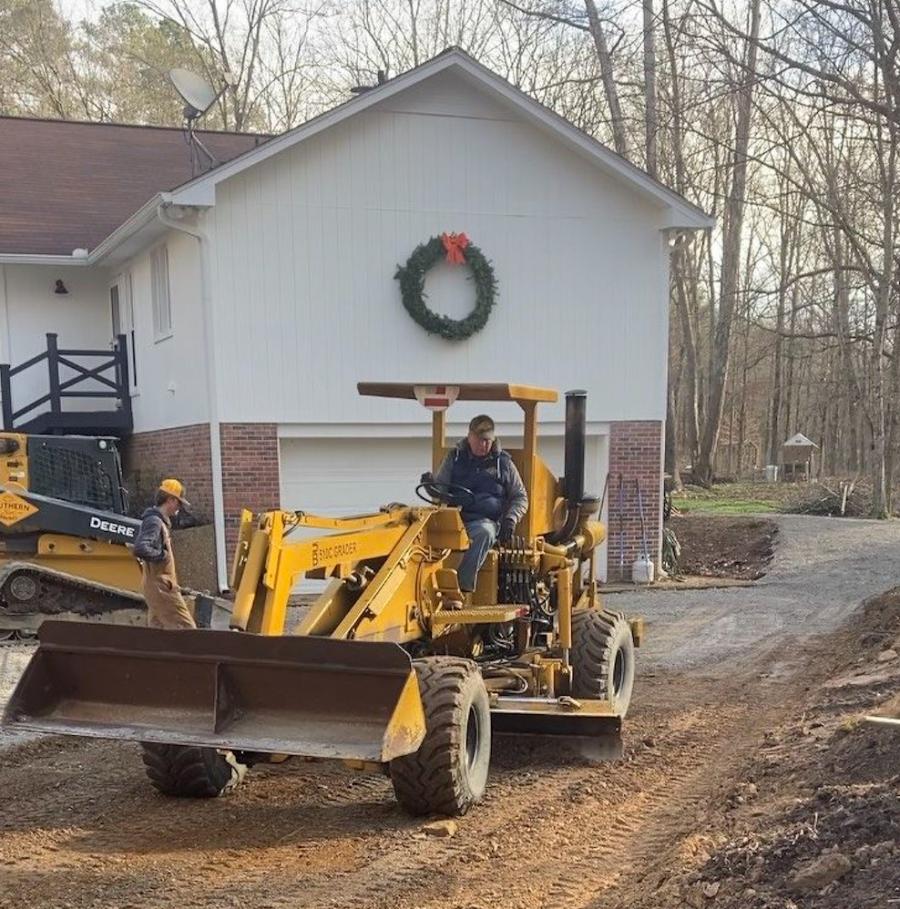 “But the parts for these graders are getting harder and harder to find when they wear out, so we started looking at our options to eventually replace them,” he said.

That led the Tennessee paving company to Mauldin, and when they saw the M415 model on display at ConExpo in 2020, they were intrigued with what the grader had to offer.

“We found that instead of having a hydrostatic motor on each wheel, which had given us problems in the past, Mauldin had changed their graders by putting hydrostatic-driven axles on the front and the rear so that each wheel will pull on the machine, making it much more useful,” Morel said. “The machine also has four-wheel steering to keep a tight turning radius, even though the wheelbase is a little longer than the Puckett. Perhaps the largest update is a single joystick to control moldboard and bucket functions compared to a multitude of levers on older machines.”

In addition to touring the Mauldin factory in South Carolina, the Morels were able to run the M415 at the manufacturer’s test-drive facility, Landon said, which made the decision to buy the machine an easy one.

Southern Sun Paving’s Mauldin M415 arrived at its new home in January, but rather than sit idle for a few months while awaiting spring, it was quickly pressed into service.

“If it was an average year, we probably would not have used it, yet, but we have done so on a handful of paving jobs already thanks to several dry, warm days,” he said.

With Southern Sun Paving’s focus squarely on its bread-and-butter paving operations, a lot of thought on the future of the company’s long-time asphalt sealcoating business is currently under way, said Morel.

“Looking at our current business model, we have talked about whether that is something that we want to expand upon or cut back,” he said. “My Uncle Brendan is the one that runs that service. He is super meticulous and does a great job, but the volume of work is not what it could be.”

Yet, he added that “there is certainly opportunity for the sealcoat business to grow.”

But because Reynolds also is a jack-of-all-trades at the paving company, skilled in doing most everything, that part of the business would require someone else to aid in running it who is equally as meticulous if its expansion were considered.

“That’s one of the cool things about being in a small family business,” Landon said. “One of the things that I enjoy anyway — maybe it is the entrepreneurial spirit — is there are so many ways to expand and get better. We could possibly develop an office staff over the next couple of years if we wanted. Any way we turn, really, there are ways to grow.” CEG