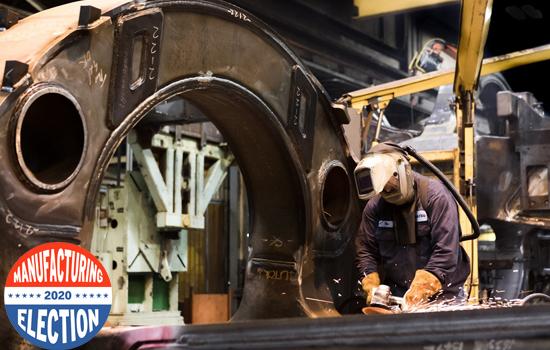 That’s why AEM and member company executives have been vocal in local papers across the country. We know the importance of the Manufacturing Election, and it’s up to us to make sure voters know it, too. This is especially important in states that manufacturing is a major sector of the local economy, such as South Carolina, where manufacturing represents one-sixth of the gross state product. But, as they wrote in The Post and Courier, Calder Brothers Corp.’s Glen Calder and Dynapac’s Brian Bieller believe that, “In order for us to maintain and grow our companies and communities, we need our elected officials in Washington to prioritize and support pro-manufacturing policies.”

Lawmakers across the country must recognize the impact of the industry. In the Philadelphia Inquirer, Volvo Construction Equipment’s Stephen Roy highlighted a recent AEM/Morning Consult poll that showed 80 percent of Pennsylvania say manufacturing will be an important factor when casting their vote in the 2020 presidential election. And in the Lone Star State, 92 percent of voters believe manufacturing is important to our economy. That’s good news, except, as Kubota Tractor Corporation’s Todd Stucke and Komatsu’s Rod Schrader shared in the Austin Statesman, more than half of Texas voters are unsure about the future of manufacturing in their state or believe it is on the decline.

We can’t let this happen. What’s the solution? By engaging with candidates and elected officials and making our voices heard. In the Cleveland Plain Dealer, Gradall Industries Inc.’s Mike Haberman wrote that voters would be “well-served to ask presidential candidates about their plans to recruit and train the next generation of workers, negotiate smart trade deals that expand opportunities for workers and businesses alike, and to build strong agricultural communities.”

As Custom Products of Litchfield Inc.’s Randy Reinke reminded us in The Post Bulletin, a presidential election is an opportunity that only comes around every four years. “In addition to our local, state, and congressional races, we have a decision to make about whether or not the President has done enough to support hard-working families across the state,” he wrote.

Weiler’s Pat Weiler said it best in the Quad City Times, imploring voters to “do your homework now, ask candidates to explain how they are going to support manufacturing, and remember those answers when you head into the voting booth later this year. [American] manufacturing workers, their families, our economy, and the future of our state depend on the decisions that you make in November.”

So with less than 20 days until the election, let’s make some noise. Join us on the final days of Equipped to Vote campaign, our inaugural get-out-the-vote initiative. Register to vote, learn about the issues important to our industry, and spread the word to your family and friends. As one, unified voice, equipment manufacturers will have an impact on Election Day.