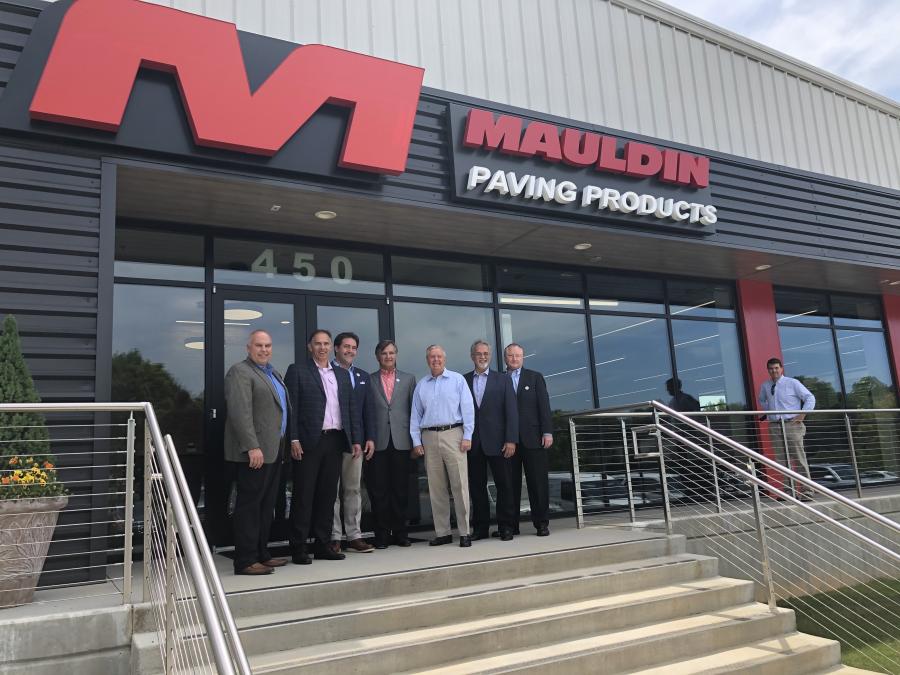 After discussing the issue with company owners and other South Carolina members of the Association of Equipment Manufacturers (AEM), Graham was given a tour of the plant before making brief remarks on the factory floor to Mauldin Paving employees and members of the media.

“I have met with some Democratic colleagues, and I don’t think we can pass a $2 billion bill, but an $800 million to $900 million package that is tailored toward construction,” he said. “I am all for building up our high-speed internet capabilities, but construction has to be the meat and potatoes of any infrastructure bill.”

Graham added that he was “hopeful” Congress would pass the infrastructure bill in the next 60 to 90 days. His belief is that it would generate a lot of economic activity for the United States and help the country continue to recover from COVID-19.

“If it does pass, it will be done on a bipartisan basis and if it does not, it would be a great missed opportunity,” he remarked. “There are enough Republicans willing to work with Democrats to get this done if President Biden will sit down and work through the details.

He elicited cheers from the Mauldin Paving factory workers, many of whom are machine assemblers and welders, when he said, “if we can pass an infrastructure bill, get ready for overtime.”

The AEM has been working with Graham to put construction at the heart of President Biden’s infrastructure bill.

Graham was invited to discuss the proposed legislation with executives at Calder Brothers Corp., the owner of Mauldin Paving, prior to his talk on the factory floor. The long-time U.S. senator from South Carolina, one of the most powerful politicians in Congress, also asked questions during the meeting and listened to Calder’s concerns. The company has been a member of AEM for 30 years. 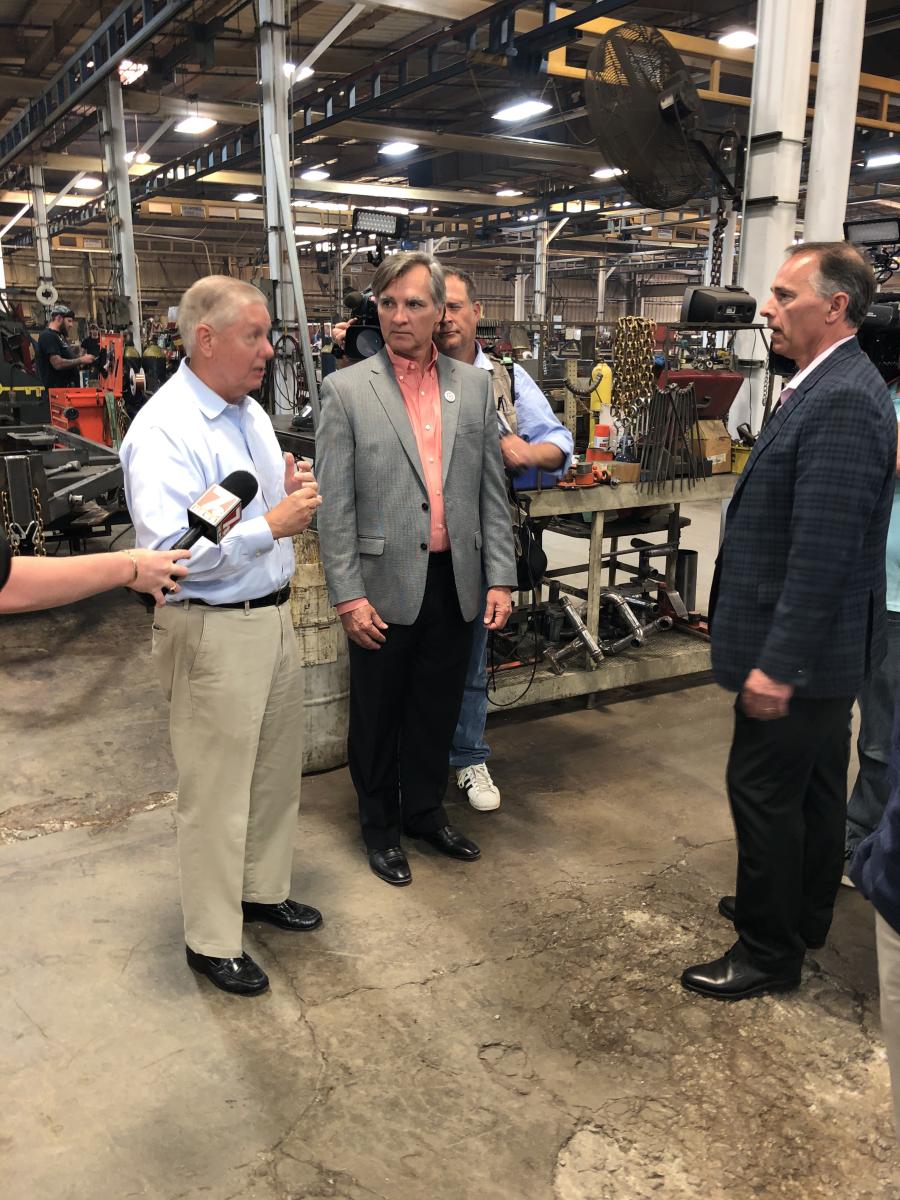 “We start with raw steel, then cut, bend, weld, paint and then assemble and sell these products,” Calder noted. “Most of our equipment is designed for the small commercial work that is done all over the U.S. and Canada. Ninety percent of asphalt manufactured is used to build roads and bridges.”

“Your company is in the high-end of the food chain as far as skilled labor, then,” Graham asked.

“Yes, our industry pays 35 percent above the national average,” Calder responded. “A trained welder, for instance, will make $23 to $25 an hour and we offer a full host of health and retirement benefits. Our top hourly pay is $28 per hour.”

The senator was impressed in hearing that, saying, “Those are good jobs.”

When Graham inquired about how existing U.S. steel tariffs have affected Mauldin and other AEM-member companies, Calder answered by saying, “My steel pricing has gone from 33 cents a pound to over 90 cents a pound. We are understanding that this latest price increase has more to do with the uncertainties over whether the current tariffs will continue or not. The steel producers are unwilling to load up on inventory that could be on the wrong side of the tariff if it goes away.

Calder also said that the equipment manufacturing business was robust before the pandemic hit in early 2020.

“It was very steady and solid and increasing every year until COVID-19,” he told the senator. “An infrastructure bill would help our industry directly and all manufacturers in general for us to be more competitive globally. To pay the wages that we pay, a world-class infrastructure should accompany those wages to compete against countries with much lower wages.”

The AEM also hoped that provisions for job training for people wanting to work in its industries would be included in the comprehensive infrastructure bill.

If that were to happen, Calder believed it would help solve a daily worry about the shortage of qualified factory workers, such as machinists and welders.

“We currently recruit from all over [Upstate South Carolina] and from the technical schools,” he noted. “We are partnering with them on welder training to get more employees. Mauldin Paving has 75 employees now, back to where we were prior to when the 2008 recession hit, when we laid off about half our workforce. But we still need to find people to hire. I could hire about five welders and five assemblers right now.”

He added that several of his workers attended a machine trade school and have become invaluable to the manufacturer.

“So, are we including all the paths to success, not just college, when they get out of high school?” he said to Graham. “Are we encouraging them along a path to become machinists and welders? I find, in our experience, that they get lost for several years before they wake up one day and decide what they want to do. Mauldin has sent welders to the high schools for their career days. We also have a standing policy that if a kid wants to try welding or machining, they can spend a day here to learn a bit about those professions.”

Later, in his public remarks in the Mauldin factory, Graham said that in discussing the infrastructure bill with the asphalt equipment maker and the AEM he better understands the ramifications of passing a legislation that is properly funded to overhaul the American road, bridge, port and rail systems. 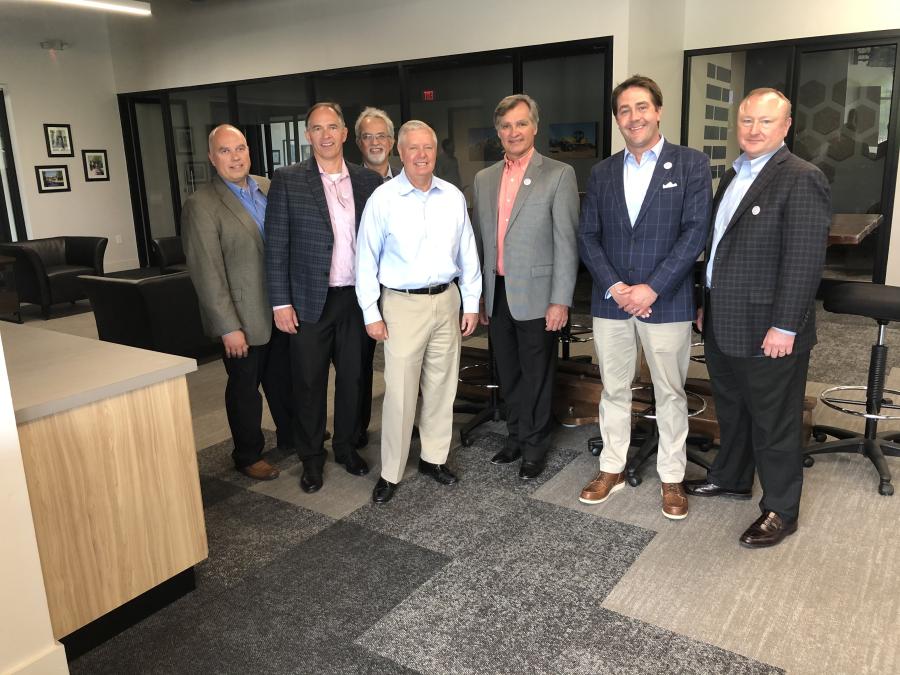 “The AEM and its members have told me that if Congress can pass an infrastructure bill it would do more to jump-start this part of the economy than any other single thing,” he remarked. “That is what we are trying to push for the country. It would be a big benefit to the employees in this business.”

Graham said the demand will go up for all of Mauldin Paving’s equipment to fix and repave, not only South Carolina’s roads and bridges, which are badly in need of repair, but also those across the country.

In answer to a reporter’s question about bolstering the country’s cyber security in the wake of the Colonial Pipeline ransomware attack earlier in May, which caused long lines and shutdowns for consumers at the gas pumps, Graham acknowledged that the attack exposed the need to diversify the pipelines and strengthen their protections.

Such measures could possibly be accomplished within the infrastructure bill.

“Clearly, a single source is not good. It proves a cyber–Pearl Harbor could happen, a massive attack on multiple fronts that could shut us down as a nation,” the senator said. “The best way to prevent that is to be strong and to let other countries know, like Russia, who allow these criminals to operate with impunity, that we will hold them accountable for the next cyber-attack coming from Russian soil. Without that, these attacks will keep continuing.”

In closing, Graham remarked, “So, my hope is that sometime this year, Republicans and Democrats can do something other than yell at each other and find a way to help the economy grow. Now is not the time to raise taxes, people have been hurting for the last year or so, so let’s get folks back to work again and show the world that the best place to do business is still in America.” CEG